The Barwon Heads Golf Club, considered by many to be Australia’s first true links course, was established in 1907. 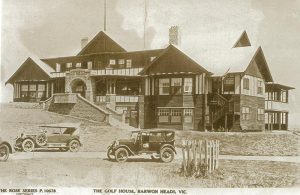 A Rose Series postcard of the major attraction at “The Heads”.

More than a decade later, on a 38 degree Saturday in December 1924, the Clubhouse was officially opened.

As the Melbourne Herald reported prior to the opening the event was such an occasion that Australia’s Prime Minister at the time, SM Bruce agreed to officiate at 3.00pm on 13 December 1924.

Unfortunately, the Prime Minister was forced to withdraw at the last minute due to a parliamentary emergency and it was left to the club president, Mr Justice Schutt to manage the proceedings.

Newspapers noticed the excitement. The Geelong Advertiser reported that the building offered ‘one surprise after another’. There was a locker room for 200 with five showers and a lounge bar with a room for billiards. On the main entrance level the first floor contained three lounges and elsewhere there was a ‘magnificent’ dining room and a total of fifteen double and five single rooms, each with a wash basin plumbed with hot and cold water. Typical of the day, there were only two bathrooms and four showers to share between house guests. 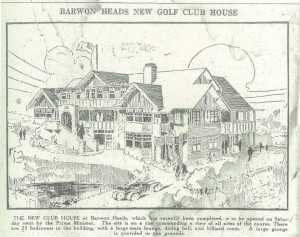 After various renovations and improvements over the years the Clubhouse now has nineteen guest rooms, all of which have their own ensuite. However, even after a significant fire in 1982 the fundamental layout of the Clubhouse has changed very little. A visitor walking into the Clubhouse foyer today will see a table that was used in the dining room in the 1930s.

A few years after the opening, Kitty McEwan, an experienced golfer and writer gave the Clubhouse an accolade in the October 1929 issue of Home Beautiful magazine, a framed original copy of which can be found on the Clubhouse wall. She wrote, “As a meeting place for town and country golfers, the delightful Barwon Heads Clubhouse, commanding a unique view of “The Rip”, through which Arthur’s Seat at Dromana, rises in hazy blueness beyond the lighthouse at Point Lonsdale, possesses many features advantageous to golf, both from the social and the playing point of view.” This unique view is particularly visible to guests who get to stay in one of the four ‘balcony’ rooms.

The Clubhouse is listed with Heritage Victoria and The National Trust. The Classification Report of the latter stated:

“The Barwon Heads Clubhouse is historically and socially significant for its associations with the development of the Barwon Heads golf course of a links design, the first established course of this type in Australia. It was the first Clubhouse with accommodation for both sexes, based upon country club lines in Victoria and is socially significant for its golf and recreational associations and the high value the community has placed upon it since its opening.” 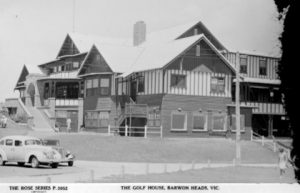 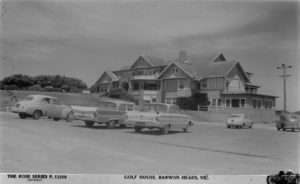 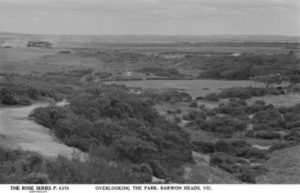